For years, Canadian soccer fans have had to grit their teeth as others spoke about the United States and their relationship with the sport. While everyone spoke about how ‘when they produce a world class star’, there is often precious little time spent on talking about Canada and their connection to the sport as a whole.

This has gone on for some time: the focus on an American star as opposed to a North American star. Cristian Pulisic was believed to be the one, and his recent form for Chelsea FC naturally has fans excited. However, while his form could see Chelsea lift the UEFA Champions League, making Pulisic part of a limited number of Americans to lift ‘Big Ears’, he lags behind one star: Canada’s Alphonso Davies.

Having already made a massive impact at FC Bayern Munich, the youngster has some already declaring him the finest full-back in world football. What, then, has been behind the stupendous rise of one of the most promising talents on the content?

Who is Alphonso Davies?

If you are a Canadian soccer fan and you haven’t heard of Alonso Davies, we have to ask one thing: Why?

Born in a refugee camp in Ghana to Liberian parentage, Davies quickly fell in love with football. They left Liberia behind amid the civil war, arriving in Canada, Edmonton to be exact, when Davies was just five years of age. By 2017, he was still considered Liberian until he was given full Canadian citizenship. The fourth of six siblings, Davies enjoyed a competitive upbringing that was full of challenges and learning moments. While it might have broken a different spirit, Davies thrived from a young age.

This infectious spirit was held back at first by an inability to grasp the English tongue with confidence. And while others might have given up, for Davies he knew that speaking English was essential to his potential to make it as his one true love.

Through all the challenges so far in life, one thing made his eyes light up: a soccer ball. This gave him the determination to speak fluent English. Alongside friend Chernoh Fahnbulleh, another immigrant from Liberia, Davies was able to make slow but sure progress with his English.

His journey to soccer, then, began in Edmonton, with local soccer group Free Footie.

The making of a Canadian superstar

With Free Footie, this handed Davies the chance to play organised soccer without funding. A huge part of the problem with Canadian and North American soccer is providing access. Many cannot afford to get the kit, the boots, or even the transport to and from games. Programs such as Free Footie look to offer a fair solution to that problem.

Over the next few years, Davies began to develop his skills and showed an incredible natural athleticism paired with endless enthusiasm. Add no shortage of technical skills, and in 2015 he joined the Whitecaps FC Residency. As part of the Major League Soccer team Vancouver Whitecaps, this gave Davies the potential lift he needed to one day play professional soccer.

After just a single year with the residency, he spent pre-season training with the senior Whitecaps FC team. He impressed enough to sign on with their USL, the second tier of US soccer, side: the Whitecaps FC 2. Quickly, he became the youngest MLS player to hold a contract, aged only 15 years and 3 months. He made his debut for the second team at the age of 15, playing in April 2016.

By May, Alonso Davies had scored his first goal – becoming the youngest scorer in history until 2020 – and had already played 11 senior games by the end of the season. His form was very impressive, and it gained him MLS interest – he signed a short-term deal with the 2016 Canadian Championship, a small tournament that the Whitecaps play in. There, he played against the Ottawa Fury, starting the second leg, and impressing. He signed a deal until 2018 at this time, including an option to cover until the 2020 season.

His first goal for the first-team came in the CONCACAF Champions League in September 2016, scoring against Sporting Kansas City to send his team through to the knockout rounds. His first start in MLS arrived that month, and already there was talk of him leaving the MLS for Europe.

Playing in regular MLS games and also in the Champions League, interest intensified from England and in Germany. Indeed, by the end of the 2018 season he was the Whitecaps Player of the Year, and by June 2018 he was on his way to Bavaria to play for FC Bayern Munich – one of the biggest soccer clubs in the world.

Do you want to bet on Bayern’s upcoming soccer matches? Cloud Bet is one of the recommended bookmakers where you can bet with your crypto coins.

The arrival of a Canadian sporting icon 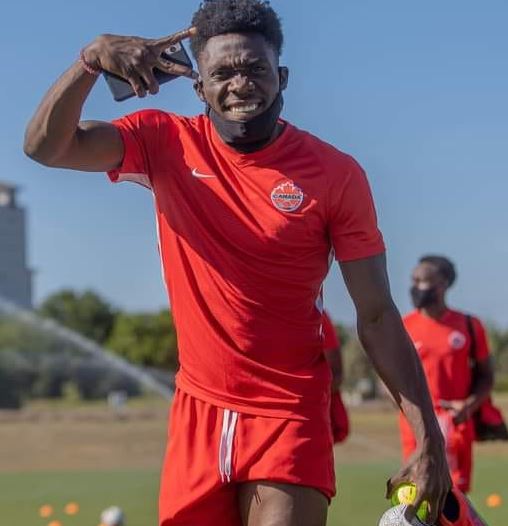 Arriving with Bayern in July 2018 but staying in MLS until January 2019, he arrived in Germany in 2019 for a fee of around $13.5m, rising to $22m, which was a then-MLS record. He made his debut in the German Bundesliga on the 27th of January, enduring a slow start to his German football career. His first senior goal for FCB arrived in a 6-0 drubbing of FSV Mainz 05 in March 2019. This made him among the youngest players in Bayern history to score a goal.

He won the title in his first year with the club and has continued to win titles since his breakthrough – including league titles in 2020 and 2021. 2019-20, though, seen his true breakout as a regular starter. Coach Niko Kovac decided to give Davies more time, playing him as an overlapping full-back on the left, and he was given regular praise for his impressive, bombastic runs.

However, it was the arrival of coach Hansi Flick that changed everything: under the German coach, Davies soon began to provide a consistently elite level of performance. His standout moments arrived in the UEFA Champions League, as he set up a goal for team striker Robert Lewandowski as they dismantled Chelsea FC in the knockout rounds.

A new deal arrived in April of 2020, rewarding Davies with a contract until 2025. When the German Bundesliga returned from the COVID-19 break in the summer of 2020, Davies played elite-level football, regularly hitting speeds of over 20mph in sprint duels with the best in Europe. He featured in most games in the Bundesliga restart and also in the Champions League restart.

Winning the Bundesliga Rookie of the Year award for 2019-20, Davies also set-up goals in the Champions League Semi-Finals against FC Barcelona, taking Bayern to the Final to face-off against Paris Saint-Germain. In the Final, another typically lung-bursting performance led Davies and co. to their first international title since 2012, and the clubs second treble (league, domestic cup, and Champions League) since 2013.

This made Davies a trail-blazer in so many ways, not least becoming the first ever Canadian international to win the Champions League. Though 2020-21 has seen some injury problems for the young Canadian, his meteoric rise has seen him win further titles, including the FIFA Club World Cup and the German Bundesliga once more.

With the left-side of defence his for years to come, Canadian soccer fans finally have a domestically homegrown talent to cheer for at the elite end of competitive sport. Having waited for so long to have even one star who could eclipse the USA’s dominance of North American soccer headlines, Davies has already achieved more than just about anyone from the continent has in the past.

For a generation to come, the inspiration won’t be talented professionals like Dwayne de Rosario; it will be a genuinely generational talent like Alphonso Davies.